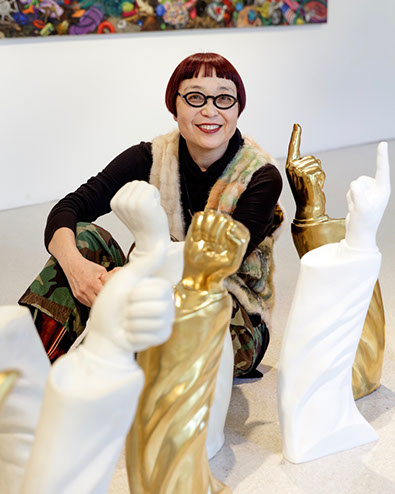 Keiko Fukazawa was born in Japan and educated at the Musashino Art University in Tokyo. Fukazawa also studied at Otis College of Art and Design in Los Angeles where she taught ceramics for four years. She currently lives and has her studio in Pasadena, California, and is an associate professor and head of the ceramic department at Pasadena City College.

Fukazawa's mother introduced her to art and encouraged her to pursue painting as a career. However, the young artist was discouraged by the cultural conservatism that made it particularly difficult for women painters. She turned to her mother, who was an excellent and creative cook. As the two women discussed the relationship between food and the vessels it is stored, prepared, and served in, Fukazawa's interest slowly moved to ceramics. While working as an apprentice at the ceramic studio in Shigaraki, she was again dismayed by the rigidly gendered practices. Intrigued by the California Clay Movement led by artists like Peter Voulkos, Fukazawa decided to come to California 1984. Today, her work reflects a California outlook that includes diverse cultural hybrids and an “anything goes” attitude. She has worked for over 30 years as a bicultural artist with an eye of an outsider. Fukazawa's recent residencies in China have given her new perspectives and innovative platforms with which to experiment with conceptual art.

Her work has been featured in the following publications; Sex Pot: Eroticism in Ceramics by Paul Mathieu, Contemporary Ceramics by Susan Peterson, Color and Fire – Defining Moments in Studio Ceramics 1950 – 2000, Rizzoli, I. P. I. by Jo Lauria, The Artful Teapot by Garth Clark, Postmodern Ceramics by Mark Del Vecchio and numerous magazines and papers including: Ceramic Monthly, Ceramic Arts and Perception, American Ceramics, art ltd, Huffington Post, and Los Angeles Times. Most recently, An Outsider Sends Message by Christopher Knight, Los Angeles Times. Her newest works have been exhibited at the Craft and Folk Art Museum in Los Angeles, El Camino College Art Gallery in Torrance, and The Los Angeles Municipal Art Gallery in 2016. 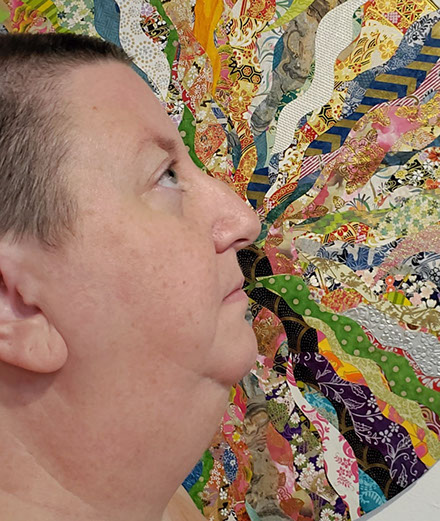 Kristine Schomaker is an Art Historian, Curator, Publisher, Art Manager and multidisciplinary artist living and working at the Brewery artist complex in Los Angeles, California. She earned her BA in Art History and MA in Studio Art from California State University at Northridge. In 2014 Kristine founded Shoebox Arts to support and empower artists while building community and creating new opportunities.

Schomaker started an open critique meet-up that takes place every 2-3 months, runs an alternative art space, Shoebox Projects at the Brewery and is an Art Activator for the organization Artists Thrive. She founded the Facebook groups: Artists Trading Co and Artist Classifieds, created a researched subscription program for calls-for-art for artists and started a free peer mentorship program.

Schomaker is also the publisher of Art and Cake a contemporary L.A. Art magazine, formed an artist collective in Los Angeles and has organized and curated numerous art exhibitions throughout Southern California. She is currently the president of the California State University Northridge Arts Alumni Association. 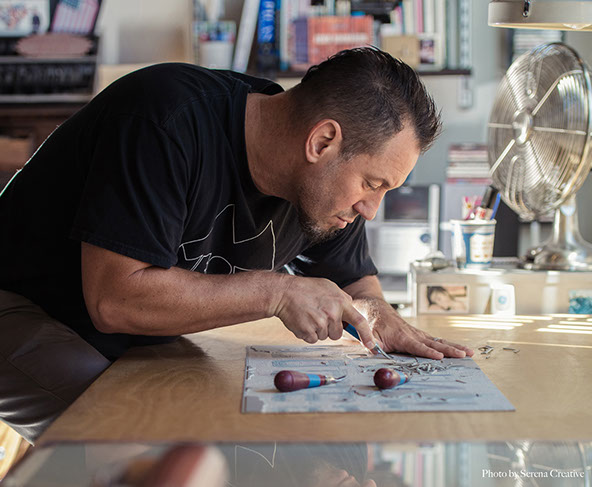 As a native-born Angeleno, artist Dave Lefner has always had a love for the city that surrounds him.  From an early age, he embraced the sunny disposition of the Left Coast, as well as the California “car and motor inn” culture of mid-century optimism.  In his work, he yearns for the day when the beauty of American design and craftsmanship was king.  From his subject matter to his process, he pays his respects to a time gone by, but finds a way to re-invent its relevance in this contemporary world. His work reflects the beauty for the city that surrounds him, with a nostalgia for its aging, but unique storefronts, signage and architecture from all areas of Los Angeles including the Valley, glamorous Hollywood, and especially his current home in Downtown LA. For Lefner, the urban landscape, complete with its burnt-out, broken neon, faded and peeling movie posters and advertisements, the web of power-lines and telephone wires overhead, as well as the occasional graffiti piece, serve as the perfect inspiration for his detailed, very limited-edition, reduction linoleum block prints.

He received a BA in Art from California State University Northridge, where he discovered a love of typography and its many faces, the graphic prints of the German expressionists of the 1940s, and, his biggest inspiration, Picasso’s series of linocuts from the 1950s. For over twenty years since, Lefner has dedicated himself to preserving and perfecting what seems to be the dying artform of reduction block printing. Because of the immediacy of today’s world, this technique is being lost in the face of a digital age. But it is the mystery of this labor-intensive process that intrigues him most. There is no room for error as the piece slowly reveals itself through a series of carving/printing stages from a single block of linoleum. To him, the journey is definitely as important as the destination.

Lefner’s work has been exhibited in notable solo exhibitions including the LA Redux: Reduction Linocuts by Dave Lefner at the Pasadena Museum of California Art (PMCA), August 20, 2017- January 7, 2018.  His work is held in the Prints & Drawings Permanent Collection of Los Angeles County Museum of Art  (LACMA) and he has been featured on KCET’s Artbound episode titled American Purgatory.

The artworks filmed, photographed and presented herein were used courtesy of each participating artist, with their individual permission.

Some images used in the logo design and graphics may be from a previous year's competition.